The Institution of Mechanical Engineers (IMechE) has awarded the James Watt International Gold Medal for 2019 to Sir David McMurtry, the co-founder and Executive Chairman of global engineering company, Renishaw.

At a ceremony at The Museum of Science and Industry in Manchester, UK, Sir David was recognised for his outstanding contribution to mechanical engineering.

First established in 1936 to commemorate the bicentenary of the birth of the inventor James Watt, the Gold Medal is awarded every two years to an engineer who has achieved worldwide recognition for their work. It is the highest award that the industry can bestow and that a mechanical engineer can receive.

Sir David founded Renishaw with Rolls-Royce colleague John Deer in 1973, to commercialise his invention, the touch-trigger probe. The product revolutionised the measurement industry and the company grew into a world-leading engineering business.

During his career, Sir David has been globally recognised numerous times for his contributions to engineering and science, including his Knighthood which was awarded for services to Design and Innovation.

While at Rolls-Royce Sir David was named as inventor or co-inventor on 47 patents or patent applications, and over 150 at Renishaw.

“The highest honour in mechanical engineering is fantastic recognition for Sir David,” explained Chris Pockett, Head of Communications at Renishaw. “He’s always been a visionary, and his leadership skills and innovation have driven the company forwards. It’s to his credit that Renishaw is now at the forefront of automated metrology and supplying industries around the world, from semiconductor manufacturing to medical and aerospace.”

2019 marks the 200th anniversary of James Watt’s death. The ceremony in Manchester was one of many events that have recognised the inventor’s contributions to engineering, including Glasgow University renaming its engineering school after him. 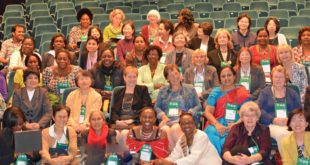 International Conference of Women in Engineering postponed until 2021

Competition for engineering jobs intensifies, as average applications per vacancy soar by 202.5%

The latest job market report from CV-Library, the UK independent job board, reveals that there were …

Engineers Without Borders UK, part of an international movement putting global responsibility at the heart …

Manufacturers must rethink global operations in face of COVID-19